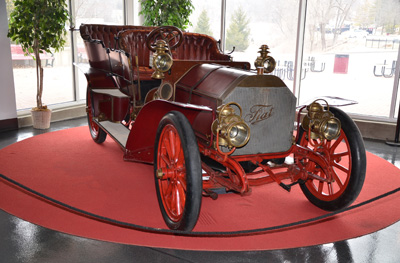 The Museum of Transportation (MOT) in suburban St. Louis unveiled the exhibit of the 1905 FIAT at the display room of its automotive building at 11 a.m. on March 1. Individuals and media were welcome by special invitation.

Molly Butterworth (MOT director) and Coby Ellison (curator) were on hand to meet and greet visitors and dignitaries. One resultant contact with the media is being turned into a St. Louis Channel 5 KSDK-TV (NBC-affiliate) interview segment to run at various times during daytime viewing. 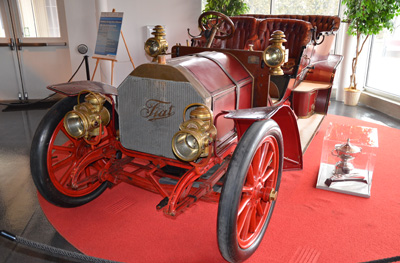 Dr. Gerald Perschbacher, nationally known automotive historian and writer, was on hand to talk about the virtues of the vehicle which is believed to be the first foreign car sold in the entire greater St. Louis area. The car was ordered by August A. Busch, Sr., beer magnate, who got wind of the car from Kaiser William II of Germany. The Kaiser purchased Car #1 of the 60-hp model of which 20 were made; Busch bought car #3, which may very well have had its chassis made in 1904 before being bodied in American by a company named Quinby of New Jersey.

"It's the sole survivor among those 20 'supercars' and was easily able to break 80 mph at a time when hard-surfaced roads hardly existed," said Perschbacher. "The car has the Busch 'DNA' all over it which is one reason to preserve its originality. And it's a notable part of early motoring in America and especially in the St. Louis area. The car is valued at about $3 million – well below the market price of the very comparable Mercedes 'supercar' of that same vintage that sold recently for $10 million." 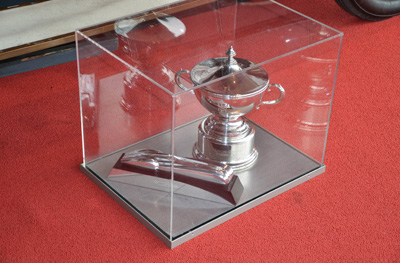 Two 2012 concours trophies from prestigious shows are also displayed alongside the FIAT. "Those are tributes to its originality, its pedigree, and its significance," added Perschbacher. "It's a one-of-a-kind gem."

The vehicle is on loan for exhibit at the MOT courtesy of the owners, who have connections with the Pioneer Auto Museum in Murdo, S.D. 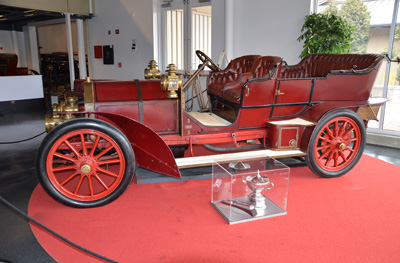 "For the time being, the FIAT takes its rightful place near the MOT's super-rare Chrysler Turbine Car and the James Darrin dream car, also a one-of-a-kind, special ordered car," Perschbacher concluded.