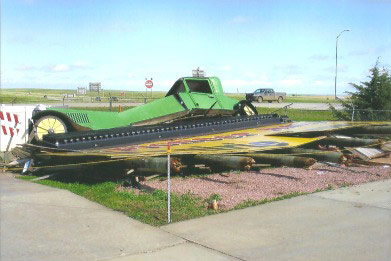 “The town’s identity has been taken!” exclaimed one classmate.

“We have to do whatever it takes to put the sign back up,” urged another classmate.

Geisler said the show must go on. Plans are in the works to rebuild the sign. Pioneer Auto is working with sign companies, and the new sign should be finished by Labor Day.

Pioneer Auto Show’s big green sign has been pointing people to Murdo and its classic car museum since 1972. The sign was erected that year in conjunction with the completion of Interstate 90.

The famous big green car was added to the sign in 1981. To allow for more parking at the nearby Super 8 Motel, the sign was moved and rebuilt in 1993.  That same year, a Daktronics reader board added to the sign. That too was destroyed in the June 30 storm.

“The sign is so symbolic for the museum,” Geisler said. “The fact that the sign was located right at the I-90 exit has helped travelers to locate us over the years. The sign has put Murdo on the map.”