News > In The Media

"A man, a tractor and the wide open road"

"A man, a tractor and the wide open road" Dewey Brooks and his promise that he kept for his Dad.

Enjoying a Tour of Western U.S.

The Mail Office acknowledges a most pleasant visit Tuesday morning, August 23rd with two visitors from Spain, who were stopping in Plankington on their way to and from a tour of the Western United States.

Nuria Barreda and Igor Cortazar, of Bilboa (a city of over 300,000) in the northern part of Spain, spent some time visiting with John and Susan Steele, as they made their way through four states, camping, mountain climbing, and seeing the sights of the “wild west”.

This is the second time Nuria has been to Plankington, having been a foreign exchange student, living with the Steeles for three months in 1996. For Igor this is his first time in the United States and, in fact, the first time he’s been out of his native country.

Murdo in May Auction

Pioneer Auto Museum presented its Murdo in May Collector Car Auction on May 20th in Murdo, SD of which 103 vehicles offered, 62 were declared sold. This represents a 60.2 percent selling rate.

In Murdo, they don’t call it hospitality row for nothing

Murdo- Murdo folks know their future depends in part on tourism, so they like to see travelers roll off Interstate 90. But if a recent visitor from Iowa comes again, there’ll be no welcoming smiles.

The traveler apparently drove through Murdo one hot day this summer and went home to Doon Iowa, to publish his impressions in the Doon Press. The column criticized Jones County for poor sidewalks, gravel streets, dry lawns and “a variety of wood clapboard churches that show better times.” The town owes its life to its county seat, I-90 and the antique car museum, the writer said.

Last summer I had occasion to go to Rapid City South Dakota on business traveling across the state on I-90 is somewhat boring and the only thing you see are billboards. A little more than halfway across the state is a little town called Murdo.

Murdo is home to a car museum belonging to a gentleman named Dave Geisler. The museum covers a lot of ground and consists of several large sheds full of old cars, trucks, tractors and equipment. It is worth much more than the admission price of $7.00. I spent a couple hours there and did not see it all. I did, however, spot a red 1955 Thunderbird that had license plates on it from 1972. It looked pretty good except for the convertible top. As I was leaving I talked to Dave about the T-Bird and he said it was for sale for $16,500. He also mentioned that "Murdo in May" was coming up soon.

Murdo, S.D., is home to Dave Geisler, your "friend beside the road." That's how he introduces himself when visitors stop at the Pioneer Auto Show museum. Murdo isn't much longer than a blink as cars speed along I-90. A few hundred people call Murdo home, so it is hardly a major metropolis. But it has something other places don't always have.

If you are traveling to or from Mt. Rushmore, the Black Hills or Yellowstone National Park, treat your group to a stop at the exciting Pioneer Auto Show and Prairie Town, in Murdo, South Dakota, located halfway between Sioux Falls and Rapid City. Classic car enthusiasts and nostalgia buffs will love The Big Variety Show, which is a fun-filled experience featuring more than 250 antique and classic cars, motorcycles and tractors, as well as collectible music boxes, toys and nostalgic items. In addition, the show features a dramatic collection of famous Zeitner rocks, gems and fossils.

This Flying By on the Interstate Has Got to Stop

A.J. Geisler was selling gasoline at his Phillips 66 Station in Murdo, SD for 30 cents a gallon and vertical fender fins were still a year away from appearing on the 1957 Chevrolet Bel-Air when President Eisenhower signed into law the bill creating the nation’s Interstate Highway system.

At the same time, a group of scientists and engineers were putting into place the makings for a very different highway of their own, an electronic highway that would decades later bring another type of traveler to the Geisler’s business.

The Tourism Education Council, the South Dakota Department of Tourism and Governor Mike Rounds have recognized Murdo’s Pioneer Auto Show and their employees for their outstanding service. South Dakota has a tradition of hospitality, and the Pioneer Auto Show employees have extended this tradition to visitors that have passed through their door, providing friendly service that has brought letters of praise from those receiving the service. “Many have found that extending a helping hand and giving a warm smile has its own rewards, but we want to recognize those individuals who are singled out by our visitors for going beyond what is expected,” wrote Governor Rounds.

Murdo, S.D., is as good a place as any to discuss cars built in the Midwest, outside of Michigan, and Dave Geisler, of the Pioneer Auto Show, may be better than most to be in that discussion.

“The Pioneer Auto Show was started in 1954 by my dad, A.J. ‘Dick’ Geisler and his family,” Geisler said. In 1945, the family moved to Murdo and opened a John Deere and Chevrolet dealership, followed later by a Phillips 66 gas station.

Eventually, when the car collection started building, A.J.’s sons, John and Dave, joined in finding some wonderful examples of America’s motoring past. Many cars came to the collection through tips and classified ads.

Guest easily can spend a day and evening at Murdo-based Pioneer Auto and Antique Town, which encompasses more than 40 buildings over several acres. Hundreds of antique cars, tractors and motorcycles, as well as vintage toys and other nostalgia, are just a portion of what’s available at his unique attraction. The facility also is home to the National Rockhound Hall of Fame and Lapidary, where rare rocks, gems and fossils are displayed.

There aren’t many ways to link Tom Mix and Elvis Presley. Maybe there aren’t any – other than the Pioneer Auto Museum, of course.

Dave Geisler and his family have gathered 275 automobiles, 60 tractors, 60 motorcycles and an assortment of additives from music boxes to rocks at their one-of-a-kind museum in Murdo. The cars range from a 1902 jewel to a 1981 Trabant, a product of the late and unlamented East German auto industry. There’s also a Flanders, a Hupmobile, and a 1959 Cadillac El Dorado with tail fins as big as those on a F-14. As for Mix and Presley: Tom’s 1931 Packard convertible is just on building over from a 1976 Harley once owned by The King himself.

Sound Your Horn - Tucker Worth The Wait

I just finished the interesting article about the fate of the missing Tucker cars. The story reminded me of an occasion about 20 years ago, when my wife and I were on a motor trip. We were in South Dakota when we saw a sign telling us to stop at the Pioneer Auto Museum just ahead. It is located at Murdo, SD, population about 600. What a surprise! The museum has a large indoor area with restored and original-condition cars.

On August 11th Mike Wolfe, Danielle Colby Cushman and a film crew from the History Channel’s “American Pickers” stopped in Murdo, SD to search through the treasures contained within the 42 buildings that make up Pioneer Auto Show and Museum. 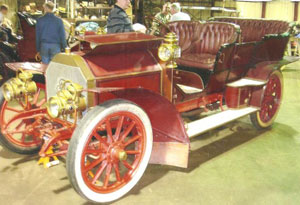 MURDO, S.D. – Pioneer Auto in Murdo, South Dakota has recently acquired a one of a kind 1905 Fiat.

The vehicle was delivered in 1905 to Hollander & Tagman in New York City. Verbal history shows it then sold to August H. Busch in St Louis, and is now believed to be the only 69 Horsepower Fiat in existence.

"This car was one of the first models to be produced by Fiat," said Dave Geisler Sr., owner of Pioneer Auto. "We are excited to add the historic value and distinctiveness of the 1905 Fiat to our collection."

With a 650 cubic displacement engine, the 1905 Fiat was a powerful four geared, rear-wheel drive vehicle owned by the elite in the time period, such as Kaiser Wilhelm.

Murdo, SD - Every year, during the third weekend of August, over 200 of the most prized collector cars and motorcycles in the world enter onto what is often called the best finishing hole in golf — the famed eighteenth fairway at Pebble Beach Golf Resort in Pebble Beach, California.

The pioneer of Murdo's Pioneer Auto

By: DOUGLAS GLADSTONE, For The Daily Republic

This sign announcing the Pioneer Auto attraction in Murdo is visible to travelers on Interstate 90. 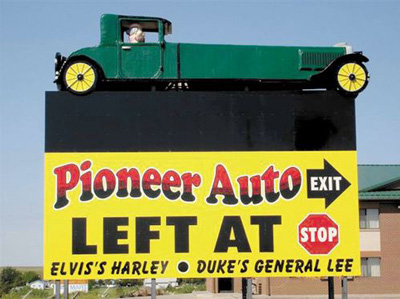 MURDO — Few people rival David A. Geisler for the title of "raconteur." He's the owner of the Pioneer Auto Show and Prairie Town, located off Interstate 90's Exit 192 in Murdo. The attraction has more than 300 vintage cars, trucks and motorcycles.